Visit to the Biltmore Estate in Asheville on December 4th.

Had photography been permitted inside the house, it would have taken me 1000 hours to get through all the rooms. Ah, the massive print collection included works by Durer! Even the kitchen had views of the mountains! All the creamy white subway tiles in the swimming pool room! The brass animals! The giant library step-ladder! Needless to say, I could go on.

These pictures are from our walk through the Shrub Garden (the Ramble) and some other gardens near the house designed by Frederick Law Olmsted (must return in spring). We finished the day with high-class desserts at the Library Lounge at the Biltmore Inn (with live piano playing Christmas music).

We dropped the dogs off at my parents the day that Hurricane Sandy was hitting the East Coast. By the time we got back to Guelph to pack for our trip, our flight had been cancelled. We rescheduled it for 6:30AM and got our stuff together by midnight, which meant three short hours of sleep before driving to the airport.

Getting through security at Pearson was actually funny so early in the morning: first the officers advised us to spread the cream cheese onto the bagels we’d brought as we wouldn’t be able to bring in the container. Fine– we used the “liquids and gels” desk to do that. Then sleepy Eric was encouraged to “be more active” and get his shoes and jacket into the bins a little quicker, not that there was anyone behind him. “It’s 4AM, this is as active as I get” he replied. They did not strip-search him or anything for being so mouthy.

After a transfer in Atlanta, we got to Asheville by lunchtime and met our baby niece at the airport. I cannot believe how small she is! She’s super cute and cuddly, but prefers to be held on her belly and my schnauzers had never had my practice that before (I will practice before next time, I promise Baby J). At six weeks old, her favourite hobbies seem to be riding in her car seat, lying on her play mat, and watching the ceiling fan. Next time we meet her she’ll probably be moving about of her own accord and maybe even saying her first words. Hopefully she’ll be learning to Skype soon.

Baby J suggested we go out to restaurants a lot so she could get a car ride, so we did. We ate out at:

Here’s proof that not all we did was eat:

During our 6-day trip to North Carolina immediately before the presidential election, I was anticipating seeing lots of crazy yard signs. Nope. It was mainly your standard DNC / RNC issue signs mixed with local billboards, but drowned out by the thousands of signs for all the lesser positions which clutter up the US ballots. Overall, I saw far more Obama signs in and around Asheville, but the biggest billboards tended to be Republican. To think of all that money spent on changing nothing… 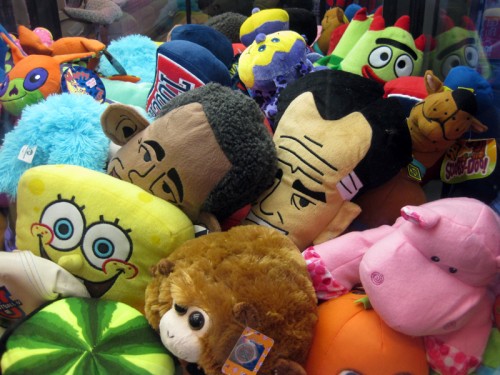 I always thought it was odd that after leaving Lonnie & Nancy’s I couldn’t remember what the house looked like. I had no word for it until I worked on a collection of materials about underground and earth-sheltered buildings. Maybe an example earth sheltering of in-hill construction type?

Yesterday, while driving to Highlands we stopped at a waterfall and I found this:

Here we are at Dry Falls:

We planted our Christmas trees today!