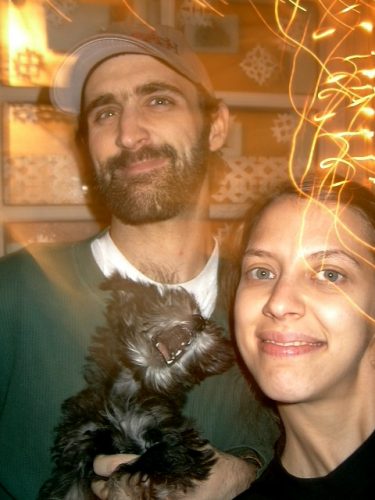 Sometimes I stumble upon old pictures of myself that surprise me. Can’t help thinking, What if…
:D

Eric loved his pottery classes so much last year that we now have a kind of pottery studio set up in our basement. But his interest in pottery is not new– for his birthday ten years ago we took an hour or so long pottery lesson in a city devoted to ceramics not far from where we were teaching at the time, Icheon. We still have one of the bowls we made which we use as a water dish for the girls (Abbey broke the other one, mine).

Here are the photos from our 2003 pottery adventure (also rescued from Eric’s old Geocities site):

Ten years ago this Christmas, Eric and I had just moved back to Daejeon after a few months back in North America. I’d just finished a TEFL training course in Phuket while he’d spent a month rock climbing in Krabi. And our buddy Pete (who’s still living in Korea) had just introduced Eric to web site design via GeoCities!

Here’s a screenshot of one of Eric’s very first projects:

This is modern “bbong-jjak” music, which I guess is retro now because it’s from the 90s. Wikipedia calls it “Techno-trot“. The best explanation I could find is from Fancy Mag:

END_OF_DOCUMENT_TOKEN_TO_BE_REPLACED

SCT: What do you remember most vividly about your first day in Korea?

Paula: All the swastikas. I landed in Seoul and got put on a bus to Daejeon and went through the countryside and you know all the temples… I saw all the banners with swastikas and thought, What the hell?

Eric: I arrived at night… Dr. Ju driving me from the airport to his house. It was so dark out, dark for being on the highway going through cities, all you could see were big buildings with squares of light.

SCT: Can you remember the first food you ate in Korea?

Paula: The very first? I don’t know… The first thing I remember buying after I slept for 18 hours and found a 711, I remember buying a little carton of milk… I got back to the hotel and opened it, smelled it, and thought it had gone bad. So I went back and got another carton and it smelled the same… like corn. That’s just how Korean milk smells. Maybe it’s what they feed the cattle.

So, you remember I was staying in the hotel with S. I’m sure we ate at McDonald’s but eventually she and I went to go find a Korean place. I remember going to pick a random restaurant, it was a galbi place, grilled meat. We were totally confused about why they were hanging around our table and why they were cooking the meat in front of us. We didn’t understand the lettuce. We thought we were supposed to make our own salad. So we basically started eating the lettuce as is, ripping up the pieces of lettuce onto our plate. The woman tried to mime how to eat it, but S. was dismissive and basically told her, Hey we know how to eat lettuce.

[instructions on what to do with lettuce]

Eric: Um. Well. The Ju’s cooked me breakfast, but at lunch at school we had bibimbap. I dumped the side dish of soup into my rice. Like an idiot.

[bibimbab is a rice dish involving mixing, but the soup should stay on the side]

SCT: What Korean food or drink do you miss the most?

Paula: I don’t know that I can pick a favourite. I don’t believe in favourites. I miss all of it… I miss getting good tofu, and dishes that have good tofu in them. You can get tofu here, but it isn’t the fresh stuff.

Eric: Drink: makkoli. And food: maybe the ssambap, or anything where you’re wrapping shit up in leaves.

SCT: Is there anything (food, event, or otherwise) that you associate with October or fall?

Eric: Having bokbunja and side salad at the base of Seonunsan after a great day of climbing.

SCT: When you were in Korea, what did you like getting in care packages, or wished you’d get?

Paula: Usually it was my mom sending practical stuff for the most part. Things that were hard to get over there, at least at that time. Sticks of deodorant. And makeup in my colours… not warm tones. And my friend sent me a tape with Gforce episodes.

SCT: If someone in Korea now could send you a care pack, what would you ask for?

Paula: Jjolmyeon kit. And… well, you can get a lot at the Korean markets here, let me think… I’ll stick with jjolmyeon.

Eric: Does this include overnight shipping and dry ice? Then a full-ass order of ddeok-bokki from the underground kimbab place, and the nude kimbab.